This is a course on Clojure for React developers in which we'll build a web-based graphics editor similar to Canva.

This is a course on Clojure for React developers in which we'll build a web-based graphics editor similar to Canva.

What You Will Learn

The concept of tree-based codes aka LISPs

Understanding of tools like NREPL to aid fast feedback

Hosted nature of Clojure and its ability to tap into JVM, JavaScript, CLR and other language ecosystems

Syntaxlessness and expressiveness of the language

How to create React applications with Clojure

Clojure is a functional hosted LISP known for its expressiveness, which has excellent interop with Javascript, Java, and Microsoft's Common Language Runtime (CLR).

Many developers praise the elegance and productivity Clojure allows, but for many it seems like an esoteric language with an "ugly" syntax that is impossible to get started with. This course will change that view and show you how to be productive with this marvelous language.

In this course, we'll build a web-based graphics editor similar to Canva. We'll explore Clojure from the perspective of a JavaScript developer. Along the way, we'll also explore state management, authentication, API integration with Google Firebase and interop with NPM.

This course takes you from zero to an understanding of Clojure semantics, LISP tools, and building a production-ready React application in just a few hours.

We'll start with the basics and build up to writing a fullstack app with both frontend and backend in Clojure.

The frontend, built using ClojureScript (Clojure that runs on JavaScript) will be a single page React application with routing, key-based authentication and API integration, which will save, list, edit and delete graphics.

The backend is hosted on Google Firebase.

Clojure is unlike other languages as it is hosted on, and can leverage, existing VMs. This means that you can learn Clojure once and write it on the backend with JVM or CLR, and the frontend with JavaScript. If a new technology like Rust takes over the world tomorrow, you will probably be able to continue to write Clojure because a Rust port is already in the making.

By the end of this course, you'll have a superpower: the ability to write fullstack Clojure applications.

In this chapter, we'll setup our system to run Clojure. We'll install all the required dependencies and run the "Hello World" program.

We need help from our editors to tame the LISPy syntax. This chapter walks through the tools we will need and why.

Set up VS-Code for Clojure development.

Clojure is neither compiled nor has its own VM. Instead, it runs on VMs of other languages. In this lesson, we'll learn about official and unofficial ports and support status.

Let's get our hands dirty with native data types and common operations.

C-style languages invisibly impose a syntax, whereas Lisps do not. This makes Lisps more expressive and easier to grasp.

Since Clojure is hosted, it can tap into ecosystems of other languages. This has led to multiple build tools for different ecosystems. Choosing the right build tool might get tough for a beginner as the pros and cons might not be known. In this module, we'll learn about the general state of build tools in Clojure and choose the right tool for our project.

Our first project is now in place. In this chapter, we'll learn how to build and run it. We'll also explore some other build targets and explore Shadow with Reagent, a ClojureScript wrapper to React.

The REPL is an essential element of a Lisper's toolkit. In this chapter, we'll solidify our grasp of the REPL and editor integration. We'll also learn about some problems that come with the REPL.

Paredit is a tool to help with structural editing. It helps you write and modify S-Expressions with so much ease that the brackets will almost disappear! In this chapter, we'll learn fundamental Paredit commands.

Clojure offers many control flow conditionals, like if-else blocks. In this chapter, we'll study the API of a few such methods.

Atoms are thread-safe containers for handling mutable state. In this chapter, we'll learn how to create and manipulate atoms. We'll also learn how to hook into an atom's lifecycle and execute side-effects.

There are many ways to define a function and parse arguments. In this chapter, we'll learn more about function definition, destructuring and some helpful higher-order functions.

Clojure sequences are abstract. In this chapter, we'll make sense of what exactly we mean by that, and learn about common operations.

Nested calls can become hard to manage. Threading macros help us take control. In this chapter, we'll learn about the concept of threading macros and study three commonly-used versions.

Clojure lets you write code close to the metal ie the host language. In this chapter, we'll learn about constructs and techniques to interact with JavaScript within Clojure.

Walkthrough the components and concepts we will implement, with a video demo of the final app.

In this chapter, we will bootstrap a project using create-cljs-app and understand the code generated. We'll also study Hiccup, a CLJS alternative for JSX, and various ways to require namespaces.

Reagent is a minimalist Clojure wrapper for React. It exposes all React APIs including hooks and is one of the most popular Clojure projects. This chapter is a theoretical introduction to Reagent. We'll learn about components, third-party integrations and local state.

We have already learned how third-party components fit with Reagent. In this chapter, we'll implement React Router in the Tinycanva app.

In this chapter, we'll set up our UI library and CSS build process using PostCSS.

Reframe is a flux-like library for uni-directional data flow. In this chapter we'll study the six-step Reframe loop.

Let's implement the concepts learned in the chapter on Reagent and React Router to build a login page..... plus the magic of REPL!

In this chapter, we'll initiate the Reframe loop for our login form, dispatch form submit events and handle them, ie implement steps 1 and 2.

We dispatched an event and wrote a handler. The handler returned an effects map, with a custom effect `:firebase/email-auth`. In this chapter, we'll create the custom effect handler and initialize the Firebase app.

In this chapter, we'll connect the UI to the Reframe loop and create loading indicators and subscriptions to check if the user logged in successfully.

We have authenticated our users, but now they're stuck on the login screen. This chapter is about building re-usable containers to redirect users to authorized pages.

In this chapter, we will integrate Reframe and Firebase to save the graphic "entity". This is analogous to a POST request with a traditional REST API.

Create Reframe handlers to read and delete graphics. Analogous to GET and DELETE in a REST API.

Integrate Reagent and Reframe to create UI for listing and deleting graphics.

Making graphic list items clickable; and the editor(detail) route. In the process, we'll learn how to use React's Higher Order Components with Reagent.

In this chapter, we will integrate FabricJS with our app and create an HTML canvas-based editor.

Packaging an app consists of multiple steps, like configuration, minification etc. In this chapter, we'll package our app with production configuration and create an optimized JS bundle, that can be deployed on any CDN.

Large apps degrade user experience and one way to control that is to split our code into chunks. This chapter will walk through tools afforded by Shadow to split our app code. We'll also implement the splits and analyze performance gains. 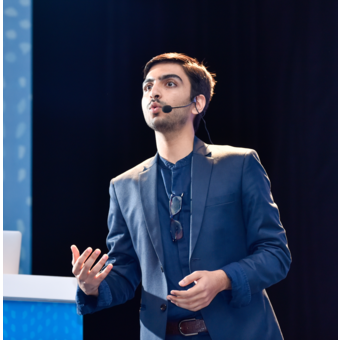 Hi there, I'm Shivek Khurana, your instructor for this course. I've been developing frontends with React for over five years and discovered Clojure in 2016. In 2017, I started writing Clojure professionally and it changed my perspective on how to build apps.

Its immutablilty and syntax-free properties embedded in me a thought process that caused to me to greatly improve as a developer.

While I was learning, I was lucky to be surrounded with some of the best Clojure talent. But not everyone has the access to senior developers like I did. This course is a distilled form of my journey over the years.

It focuses on the aspects of the language that turned out to be important in production. I also built this course so I could recommend my clients to use Clojure. I hope it helps you - and makes you a better developer!

Who is this course for?

This course is for React and JavaScript developers who want to explore functional languages and concepts.

What if I need help?

You can ask us questions anytime through the community Discord channel or by sending us a message.

Are there any prerequisites?

Yes. The course assumes that you have a fair understanding of React, SPA routing and Redux like state management.

The newline Guide to Clojure for React Developers: Building Canva