To get in front of what might later become confusing, I want to stop and quickly talk about Frameworks and Libraries.

This post is part of the series 30 Days of Web Development.

In this series, we start from the basics and walk through everything you need to know to get started with Web Development.

To get in front of what might later become confusing, I want to stop and quickly talk about Frameworks and Libraries.

You'll often hear people refer to Frameworks, Libraries, and Programming Languages as if they were all the same.

They are not. They are different things. Not making matters any better, the lines between a "library" and a "framework" aren't always clear.

For example, you may come across a job post requiring skills in PHP, React, and Angular.

Frameworks and Libraries are a collection of tools that support writing in a particular Programming Language.

For example, the popular Library called React was built by Facebook. Facebook created React to help manage data and make maintenance of their codebase more manageablewhyreact. React extends JavaScript, but it does not replace it. Therefore React isn't a Programming Language, just a tool that, in many ways, makes JavaScript more powerful.

If you haven't guessed already, I'm a fan of non-computer analogies. Thus, in keeping with this theme, a good analogy is to think of Frameworks and Libraries as netspeak. Don't know what netspeak is? I bet you do; you just didn't know it was called "netspeak."

These are all examples of what is referred to as netspeak. So back to the analogy. Netspeak, is the Framework and Library of the English language. I doubt many grammarians would say that Netspeak is making the English language more powerful. But it is shortening the number of characters you need to type and making it faster to communicateanalogy.

Frameworks and Libraries have become a crucial part of Web Development. They are a topic you will learn more about as you progress in your learning.

Learn the Programming Language First. Once you have a handle on the language, then explore Libraries and Frameworks.

In this exercise, we are going to write the same set of instructions using the following:

Below is an example of what it would look like in the HTML if we wanted to use the jQuery Library. We would have to include a link to it.

However, to avoid having to deal with linking to jQuery or Vue, I am going to use a program called Codepen.io for this exercise. The reason is two-fold:

Once open, you should see something like the following. My settings/look are likely different than yours, but the content is the same. 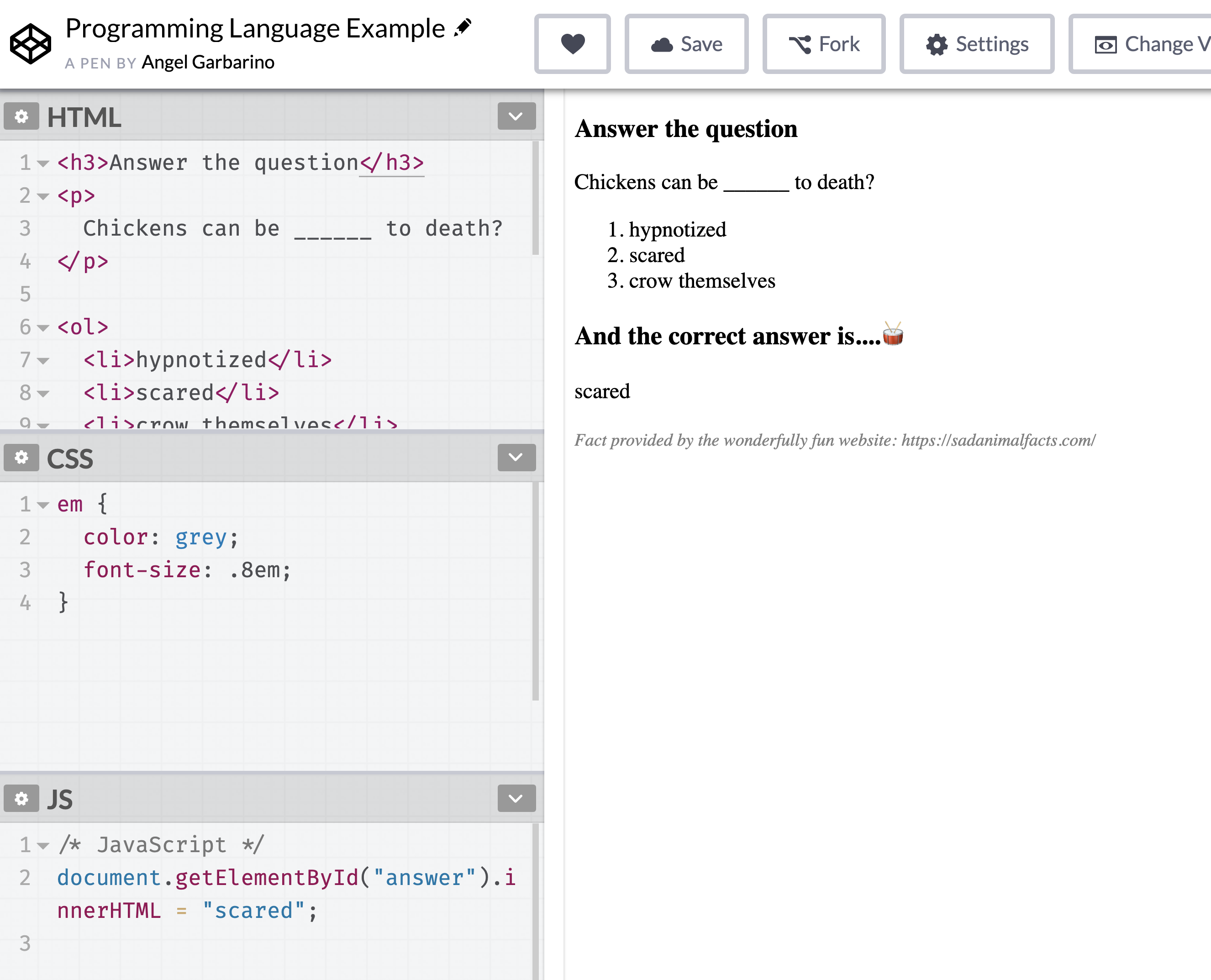 Pens are what folks refer to a small project on Codepen.io.

On the left-hand side of the screenshot, you have HTML, CSS, and JavaScript respectfully. In this example, I am using plain JavaScript to answer the question.

If you'd like to play with this Pen or any of the others, go ahead and create a Codepen.io account, and then "Fork" the Pen on to your account. Instructions on how to "Fork" can be found here. Once forked, you can play, break, and mess with the code as much as you'd like.

Get the rest of this chapter and 180+ pages of Web Development instruction for free.

I am a self-taught Frontend developer. Not until I was in my early thirties did I seriously consider building up skills as a web developer. In all honesty, I wasn’t even sure what it meant to work as a web developer. All I knew was, I wanted to work on computers because I was decent at using them, and I was attracted to the job opportunities.

I wrote this book for the “me,” five years ago; for the person who is starting to think about what it might take to become a programmer or web developer. My path was convoluted, stressful, and inefficient. But it did not have to be.

I started by reading articles and seeking advice from friends. I continued with more articles, books, and online courses. As my skills or ability to fake-my-skills improved, I sought out consulting gigs. Fixing friends’ websites, and then being hired out as a consultant. On the job learning is great, but I had no idea what I was doing and stressed and slept little during these contracts.

Eventually, I landed a position at a web application company. I made friends, asked questions, and studied the skills I learned were needed for a job as a Frontend Developer. The weekend studying paid off, I applied for a Frontend Developer position, and I got it!

In this book, I will cover the fundamentals. But more importantly, I will talk about why they are the fundamentals. My goal is not to teach you a specific skill like HTML. Instead, I show you how to navigate what’s ahead of you. I get you set up for your next steps, whether that’s a path of self-learning or attending a bootcamp. By the end of this book, you will be able to make an educated decision about your future and understand the steps and commitment it will take to get there.

Join us on our 30-day journey in Web Development. Learn the basics of HTML, JavaScript, the Terminal and start your journey to becoming a web developer